I am an early adopter of KDE 4 and I welcome the radical changes it has made from earlier versions. I have been using KDE 4 from 4.0 release and has been following its growth from simple & buggy to feature-rich and mature. The fifth installment of KDE 4, KDE SC 4.4, released on February 9th caused a lot of excitement among KDE fans like me. I could not wait for the shiny new packages arrive in a distro near me.
Kubuntu seemed to be the winning choice because I have seen early KDE 4.4 reviews state that Kubuntu was the easiest and less buggy path to 4.4. In this article, I will be reviewing both Kubuntu Lucid Lynx the new KDE SC 4.4. I chose the 32 bit version of Kubuntu Lucid Lynx alpha 2. The test machine was Compaq Presario V3000 series (V3624AU) with AMD Turion 64 X2 @1.8GHz cpu, 3 GB RAM, Nvidia GeForce Go 7150 integrated display card and Broadcom wifi card.

Installation
The install was a routine Kubuntu ubiquity based install, but very polished (inspite being an alpha release). Soon after the install, I upgraded to the latest packages. The inclusion of open source Nvidia Nouveau drivers in the mainline kernel 2.6.32 has led to crisp fonts and perfect detection of screen resolution in comparision to earlier Kubuntu versions. As with other Kubuntus, I had to connect wired internet to allow Jockey download and install Broadcom wifi driver. After installing the Broadcom STA wireless driver I could easily go online wirelessly. There was a minimal glitch that the Nepomuk strigi indexer complained about missing virtuoso server which was solved by installing Openlink Virtuoso open source edition. Hopefully this problem would be solved in the final release. 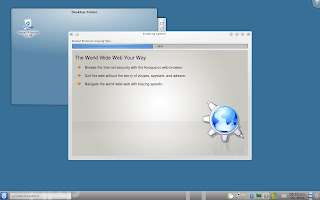 After the final install/upgrade the bootup time was noticeably faster as promised for Lucid Lynx by Ubuntu developers. The bootup time was as follows: grub to login, 20 secs; Kdm login to fully loaded desktop, 19 secs; Total: 39 secs. I feel this speed is pretty impressive.
The default Oxygen theme and the default wall paper (Ethais) by Nuno Pinheiro was elegantly stunning and in my view truly rivaling Mac OSX. 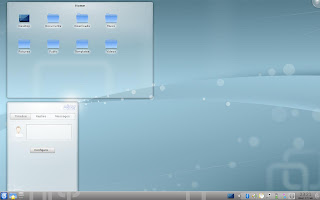 Packages
As soon as I logged in, I installed Firefox (FF 3.6) with the firefox installer (yes, you can notice, Yahoo is the default search). As soon as I fired up Amarok (ver. 2.3 beta 1), it prompted to install all the necessary codecs, which was also done smoothly. Amarok 2.3 shows a lot of cosmetic changes. I could play youtube videos, but in Full HD 1080 P or HD 720 P videos were extremely choppy. So again I fired up Jockey to install the latest (as recommended by Jockey) Nvidia driver and restarted X. I tweaked the settings in Nvidia control center and the fonts, graphics and youtube videos were pixel perfect. Openoffice installed was version 3.2 RC 4. Chromium browser is in the repos, so I could easily apt-get install it and it worked perfectly. (Chromium will be my browser of choice because of its better looks). Skype (2.1.0.81 beta) from the official site worked flawlessly. 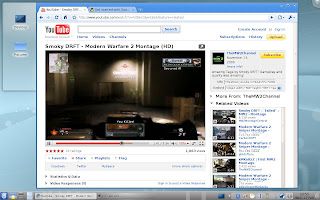 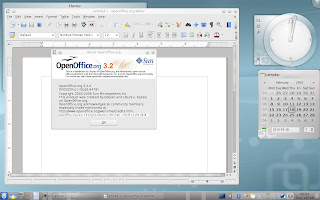 KDE 4.4
KDE 4.4 shows lot of improvement in terms of speed, robustness and maturity. There are lots of subtle changes which a seasoned KDE 4 user will notice. Oxygen theme seems even more polished. A few of the new features are tabs within windows, the destop widgets shown as a strip above the task bar, hovering the mouse over a minimised window in taskbar showing motion in youtube videos (just like Win 7). Folders show the content within, the system tray can be expanded or collapsed, the USB device manager has moved to the system tray. As a result of the "semantic desktop", searching the KMenu also shows the files related to the search term (again as in Win 7 or Mac). There are lots of features which remind of Windows 7 like double clicking the window title bar expands it to full length. Composting and window transparency is done wonderfully well (provided there is a decent graphics card). Overall I am very much satisfied and happy with KDE 4.4 release and it could easily make Gnome and other DE fans jealous, let alone Windows 7 and Mac OSX users. I would not agree to anyone claiming that KDE 4 is still buggy and sluggish. 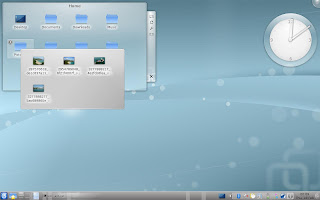 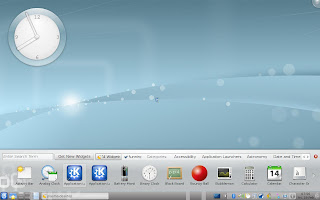 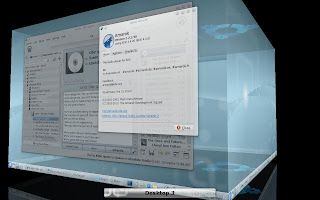 Conclusion
Though in early stages of development, Kubuntu Lucid Lynx, proved to be robust and efficient in showcasing the newest KDE. I did not encounter any major problems so far except that I could not mount the NTFS partion from Dolphin and access the files (I got an error: org.freedesktop.Hal.Device.Volume.PermissionDenied: Refusing to mount device /dev/sda3 for uid=1000.).
This level of perfection reflects on how good the final release version is going to be. I would recommend Kubuntu Lucid to any serious KDE user instead of the current stable Karmic. I would rate 4/5 stars to Kubuntu Lucid Lynx at this stage. Take the plunge and enjoy KDE 4.4 with Kubuntu Lucid. Here's a link to more screenshots from my Picasaweb album.
Posted by Sid at 7:39 PM

I installed kubuntu karmic (64bit) recently and I have upgrade to 4.4SC. I can certainly say that it is awesome. I had had though to manually configure the sound and the shutdown/restart bug (HP Pavilion dv7. If only I could to synchronize mi iphone... (I haven't tried yet succesfully iFuse).

Thanks for the review! I'm looking forward to Kubuntu 10.4!

Can't wait and I'm glad to see that there are other people who enjoy Kubuntu. I usually see such bad comments about Kubuntu and I'm totally baffled by it. I switched to Kubuntu at the end of last year and I love it! By far the best Linux I've ever used.

>"I would not agree to anyone claiming that KDE 4 is still buggy and sluggish."

Have you tried using the semantic search? I have to go back to using the regular search (the one in the dolphin menu that is a copy of KDE3's search) and occassionally just using locate and/or grep as the dolphin search just appears to suck resources and not do anything useful.

I like it so much. I love the way it responds. I like the way it looks like. So slick and smooth. But actually I found some problems when I have to extract some RAR files. I have the program I need to do that and it works great in Gnome. I just don't know what's wrong so right now I'm not using it. After a while I may well switch back to KDE.

Sweet, I will install it tomorrow, I can't wait to see the new Amarok :)

Does somebody know how we can connect iphone with ifuse on KDE? 'cos KDE automatically runs when I plug my device but can not achieve the file tree. In Ubuntu on GNOME it it so easy to use ifuse. I think many user have the same problem. What are we gonna do? :(

You can also just install the Kubuntu desktop in regular Ubuntu, thats what I did.